To share your memory on the wall of Wayne Swank, sign in using one of the following options:

Wayne was a pioneer in forest hydrology. He received his undergraduate in Forest Management from West Virginia University in 1958, a Masters in Silviculture from the University of Washington in 1959, and a Doctorate in Forest Hydrology from the University of Washington in 1972. Beyond these formal activities, Wayne was generous with advice and ideas and he had decades long partnerships with numerous scientists in federal agencies, research labs, and universities locally and from across the world. While Wayne’s scientific accomplishments were exceptional, among his greatest contributions were in shaping the careers of students and early career scientists. He served as Adjunct Professor at six universities; primarily at University of Georgia, Clemson University and University of Florida.

He enjoyed woodworking, fishing, running, gardening, photography and playing cards among other hobbies. He touched all 4 corners of the globe both in business and pleasure travels. He and his wife of 62 years enjoyed traveling the world together including a 3 month stay at the University of Durham in the UK, a 2 week trip in Australia and the 3 week trip to China. He was a member of First United Methodist Church and long-term member of the Rotary Club of Franklin.

Funeral services will be held Saturday November 14th at 11am at Franklin First United Methodist Church. Due to COVID, the family will not be gathering prior to the service and social distancing will be practiced and masks should be worn. The service will be streamed live via Franklin First United Methodist Church Facebook:
https://m.facebook.com/FranklinFirstUnitedMethodistChurch/ . Memorial donations can be made to https://www.alz.org/

Condolences may be made to the family at www.maconfuneralhome.com

Receive notifications about information and event scheduling for Wayne

We encourage you to share your most beloved memories of Wayne here, so that the family and other loved ones can always see it. You can upload cherished photographs, or share your favorite stories, and can even comment on those shared by others.

Posted Nov 13, 2020 at 12:46pm
Roberta and family, I know Wayne and Sam are talking Rotary and trees in heaven. Sam loved both as did Wayne. I'm thinking of all of you. Love

3 trees were planted in the memory of Wayne Swank

Posted Nov 19, 2020 at 09:34am
We are so sorry and send our condolences. In my early years working for the US Forest Service, we visited the Coweeta Lab many times and I learned so much from Mr. Swank. His research and teaching were the backbone of good forest management for federal, state and private lands. Best Management Practices, and other guidelines were developed bases on his scientific papers. His legacy will live on forever and I am proud to say I knew him and appreciated his work.
Comment Share
Share via:
SW

Posted Nov 14, 2020 at 10:36pm
Dear Roberta and family-- I just finished watching the memorial service for Dr. Wayne Thomas Swank at the Franklin First United Methodist Church. That was one of the best memorial services that I have watched or attended. Everyone who spoke knew Wayne in a very special way and they shared that with all of us who grieve his passing. And the mix of photos that you shared at the beginning were special too. It must have been fun for the entire family to pull all those snapshots of his life together. He would have enjoyed them too.
I knew Wayne from his work for the U.S. Forest Service. For a brief time, I was his supervisor of record (never his "boss.") He taught me so much about his beloved Coweeta and hydrology and forests, and insects and how they were all intertwined. But mostly he demonstrated to me how a person could lead with the love and respect of all around him. From what was said during the service, I'm guessing he had that same relationship with the people in his hometown of Franklin. "Do the best you can every day," and "Don't judge others." Those are two quotes from the service today. We were lucky to have known such a man.
-- Nancy Herbert, Asheville, NC
Comment Share
Share via: 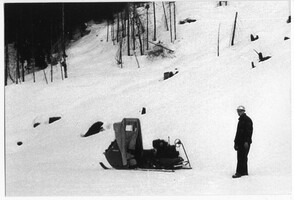 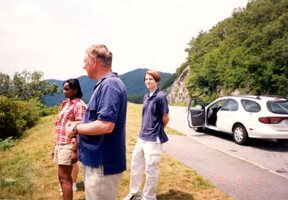