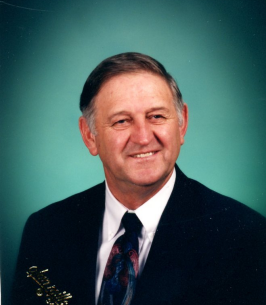 Born in Macon County, he was the son of the late Charlie and Hazel Penland Sutton. In addition to his parents, he was preceded in death by his wife of 55 years Jean McCollum Sutton in 2012 and sister Nancy S. Winecoff.

Jerry was a dairy farmer in the Clarks Chapel community who later turned to a career in public service retiring as the director of Governor James B. Hunt’s western office. A dedicated community leader, Jerry served on the Macon County School Board and Macon County Board of Commissioners. As a strong supporter of public education, he served on the Board of Directors of Southwestern Community College for over 30 years. Jerry led community development efforts in Clarks Chapel, Macon County and in western North Carolina. Community development efforts led to the founding of Clarks Chapel Fire Department, the first rural fire department in far western NC, where he served as Chief for three decades. Jerry was a tireless worker in the community serving many organizations as coach, organizer, and supporter. His joy in all these activities were the relationships he built with the people he worked with. Jerry loved his church family at Clarks Chapel United Methodist Church, where he was a lifelong member.

Jerry was a proud graduate of both Franklin High School and NC State University.

The family will receive friends from 1:30pm to 2:30pm, prior to the service at Clarks Chapel United Methodist Church in the fellowship hall.

Memorials can be made to the Macon County Fair Association, PO Box 446, Franklin NC 28744.

Online condolences can be made at www.maconfuneralhome.com